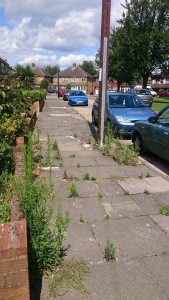 In a recent post, I highlighted issues in the Charville ward in Hayes that had been brought to my attention by local residents. These had been relayed to the local councillors to look in to, which elicited the following response from Labour’s John Oswell

I did’nt realise that you lived in Charville ward and that you are a representative there, just who do you represent?, if you look carefully I think you might just find that the ward has three elected Councillors and guess what, you are not one of them.
Can I suggest that you leave Charville matters to elected ward Councillors who actually are all very active on ward issues and that is without any help from you, I might add,
Cllr. John Oswell.

END_OF_DOCUMENT_TOKEN_TO_BE_REPLACED

You raise some very valid points but as usual fail to identify the root causes of the issues in our area.

As UKIP’s Hayes & Harlington spokesman and effectively the opposition party in the constituency, here is my reply to your speech.

END_OF_DOCUMENT_TOKEN_TO_BE_REPLACED

Our national debt recently exceeded the £1.5 trillion mark – We spend more money in interest payments on the debt annually than we do on defence. Locally, our Conservative Council constantly tell you about their outstanding financial record in much the same way as their national party do at Westminster. ‘Council tax frozen’ is one of their favourite cries, neglecting to mention that Hillingdon levies one of the highest council tax bills in London already.

Their ‘financial prudence’ claims are further tested by the write off of £2.5 million of your money in 2011 in a failed Icelandic Bank, with millions still owing from Landsbanki and Heritable.

END_OF_DOCUMENT_TOKEN_TO_BE_REPLACED

UKIP Hillingdon are proud to announce our first public meeting to put the case for EU withdrawal (BREXIT). This is a non-aligned meeting where people from all political parties and none are welcome to attend, listen to the arguments and participate in our popular question and answer sessions

Gerard Batten MEP – A founder member of UKIP in 1993 and London MEP since 2004, Gerard has seen the inside workings of the Brussels Parliament and how it impacts on our rights and freedoms as British Citizens

Mark Hughes – Listed in the Top 100 fund managers by Citywire , financial expert Mark Hughes has run his own investment company since 1997. Mark believes our businesses and economy will flourish outside of the unnecessary regulations imposed by the EU

The long awaited Davies Commission report in to aviation in the South East has been released this morning and recommends expansion at Heathrow.

UKIP Hillingdon reject the need to build an additional runway at Heathrow based on a flawed business case which is all about the profits of big overseas investors and not the needs of the UK economy and local people.

Commenting on the news, Hillingdon Chairman and spokesman for Hayes & Harlington Cliff Dixon said, “The figures show that both business and ‘hub’ flight numbers are in decline as new aircraft enable longer distance point to point flights with the trend moving from business to leisure travel.

The case for one ‘super airport’ when we already have excess capacity in the South East at Stansted, Southend and Luton and a runway that can be re-activated at Manston for larger aircraft is unproven. Indeed, the old BAA was broken up to stop one company having a monopoly on air travel around the capital yet expanding Heathrow will effectively reinforce the dominance of one site.

UKIP Heathrow Villages spokesman Bryan Tomlinson stated, “Our community in the Villages has suffered blight, noise and pollution from Heathrow with the two runways, adding a third will make our environment impossible to live in.

Air pollution is already double the maximum safe limits – On a bad day it can be up to nine times that limit with many people suffering adverse health conditions because of the aircraft emissions and the increased traffic levels that the airport brings.

The Conservative Government today launched a policy making it clear that any non EU migrant working in the UK would have to earn over £35k per annum within six years of arriving in the UK or face deportation.

Commenting on the news, UKIP Hillingdon Chairman and spokesman for the Hayes & Harlington constituency, Cliff Dixon, stated, “There are many people working within our NHS doing vital jobs that pay far less than the threshold at which the Government is setting these new regulations.

During the recent General Election campaign, I pointed out how the NHS is having difficulty recruiting trained technicians for research in to infectious diseases at a number of our top hospitals, including The Royal Free which is leading the fight against Ebola. They are losing out under current rules where those much needed professionals are going instead to Australia, Canada and the USA. Now they will be faced with the reality of losing the technicians they already have with an inability to replace them from within our current talent pool in the UK.

Our own hospital at Hillingdon, already stretched for staff to the extent that they had to spend over £1 million in the final quarter of last year on agency nurses, will see even more shortages that will result in further overspend to bring in temporary workers from the private sector”

Once again, the government ignores the real problem of unlimited, uncontrolled migration from EU member states at the expense of trained professionals from the rest of the world.

Much was made in the recent General Election of the impending shortage of housing in both our area and England as a whole.

Despite the building of new estates in Ruislip and West Drayton, with another currently underway on the old RAF site in Uxbridge, the shortfall in supply has seen prices to both buy and rent spiral to such a degree that the average age of a first time buyer is now nearly 40 and many of our children are unable to afford to leave home.

END_OF_DOCUMENT_TOKEN_TO_BE_REPLACED

If Transport Secretary Patrick McLoughlin thinks that the General Election result was an endorsement of HS2, then why have the Tories and their 2 MP’s in Hillingdon consistently campaigned on a platform of opposition and not on a pro HS2 ticket? Once again, proof that a Conservative vote in Hillingdon has allowed their party at national level to ram through plans for a rail link that is unnecessary, costly and will destroy parts of our borough. The following story is from The Express & Star….

Transport Secretary Patrick McLoughlin is ‘delusional’ if he thinks the General Election result was an endorsement of the HS2 rail link, a leading UKIP MEP has said.

END_OF_DOCUMENT_TOKEN_TO_BE_REPLACED

On Friday 5th June it will be 40 years since the British people had a vote on our membership of the European Union. Now we are promised another referendum by David Cameron. But will it be fair?

Already there is talk that the EU Referendum Bill may be amended to allow about 1.5 million non-British citizens a vote on the future of our nation on the grounds that they are EU citizens who live here. Of course, if EU nationals who have come to the UK have taken the trouble to gain British citizenship then they deserve to have a vote. If they have lived in the UK for donkey’s years but kept their Italian or Spanish citizenship then they do not.

There is also the suggestion that the vote would exclude military personnel and many other British people temporarily overseas.

It is also a concern that the Bill makes no provision for a “purdah” period to stop the government unfairly interfering in the Referendum campaign.

None of these things would be fair. Worse, they would be dangerous. It these ideas are adopted they will call into question the legitimacy of the referendum.

If David Cameron, his ministers, or the Lords take us down the road of giving EU nationals a vote in the EU referendum it tells us the vote will be a sham and they have no confidence they can win it – without gerrymandering the result.