Last week saw Metropolitan Police Commissioner Sir Bernard Hogan-Howe visit Hillingdon for a Q&A session with local residents. Interested to hear what would be asked and how the Commissioner would lay out his roadmap for the borough, I attended the debate at The Civic Centre

Crime Statistics for the Borough

Sir Bernard was introduced to the crowd by Chairman David Brough of the Hayes Town partnership and was accompanied on stage by new acting Borough Commander, Supt Colin Wingrove.

Opening with a presentation of the statistics for crime in Hillingdon, the following were presented via a projector with Sir Bernard talking us through them –

He also relayed the MOPAC figure that 60% of people in Hillingdon have confidence in the Police, below the 68% average for the Metropolitan Police area for a whole.

With the presentation finished, David Brough then took questions from the floor in batches of three for the Commissioner. To his credit, these were not pre vetted and he did not know what was coming so a broad section of topics were covered.

Police numbers – Connie from The Oak Farm Residents association pointed out that we are 79 officers short in the area and asked what was proposed to rectify this. Supt Wingrove answered and denied this was the case. (Interesting as UKIP Hillingdon had a freedom of Information request answered a few months back that showed Police staffing had dropped from 834 in 2010 to 724 in 2015). Sir Bernard admitted that recruitment had stopped due to a £600 million shortfall in funding which has now been made up by closing Police stations in areas where they were deemed to be underused and selling off the land as well as in efficiency savings. This meant that he was now in a position to recruit again and the Force had been doing so.

Repeat offenders – It was put to Sir Bernard that a number of people who re-offend have mental health issues. He agreed that this was the case but that with cuts to Mental Health Provision his officers were increasingly seeing this trend and that they were attempting to work with health services to deal with the issue.

Reaching out to the community – Mohamed Ali from The Forum for Change and Engagement pointed out a ‘missing link’ between parents, children and the Police in our local Somali community whilst a Sikh gentleman at the back of the room pointed out that many crimes in the Asian community are kept ‘in house’ and not reported due to a lack of engagement.

Sir Bernard said he would be happy to work with intermediaries in the Somali community to help build a rapport and pointed out that the Police are now doing more school visits to engage with our youth to build confidence and engagement. He was also very keen to arrange visits to both Temples and Gurdwaras to build dialogue there too. He also pointed out that members of the community can get involved by becoming volunteer ‘Special Constables’ which would be a great help where resource is stretched thin. 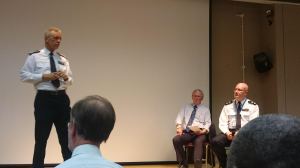 Sir Bernard said there was an increase immediately after the vote but that levels were back to around the usual now and they are working to bring them down further.

Domestic Violence – A lady in the audience said she was disappointed with the conviction rate for domestic violence. Sir Bernard said that this should improve as body worn cameras are rolled out to officers across the Capital, giving additional evidence to the prosecution

Antisocial behaviour – Graham Bartram of the Ruislip Residents Association pointed out that there were problems with gangs of youths around the shops in his area that had not been addressed. Supt Wingrove said that he was aware and additional squad cars had been moved to the area to deal with the problem.

Sir Bernard said that the Met are reshaping the zone covered in the Villages in order to get more officer coverage and that this was already underway – Mrs Stone said that this has not made a difference. He also underlined the efforts that have been made by Heathrow Airport Ltd to provide suitable parking for the drivers and also the electronic zoning that is being put in place so that those in the wrong areas will not get fares from the airport. Supt Wingrove pointed out that this ‘zoning’ does not cover Uber drivers, however.

Availability of custody suites – A member of the audience pointed out that the only operational custody suites in the south of the borough are at Heathrow Airport and that the main station at Uxbridge does not currently have facilities. Supt Wingrove said that there is currently a resourcing issue around re-opening the custody suite at Uxbridge so it is not likely to be functional in the near future.

Police Priorities – It was pointed out that the MOPAC7 priorities had expired and not been replaced (These are the 7 priority areas for the Met to try and reduce crime by 20%, set by The Mayors Office for Policing and Crime or MOPAC for short)

These were burglary, violence with injury, vehicle theft, theft from a vehicle, theft from a person, robbery and criminal damage – Hillingdon has seen increases in four out of the seven priorities in the last year.

Sir Bernard responded that he was awaiting instruction from The Mayor’s office on this.

Considering Sadiq Khan has been in place since early May I found it quite astonishing that he had not got around to discussing Policing priorities with The Commissioner, especially as he recently announced in the media that there would be a department set up to deal with on line ‘hate crime’ via such sources as Twitter.

Child sexual abuse – A lady in the audience stated that she had reported a case of child sexual abuse to the Police and nothing had been done – Sir Bernard asked for her to speak with one of the officers in the room at the end of the event as he wanted to know and it needed to be acted on.

Officer turnover – Keith Saunders brought up the subject of many officers in the area being ‘Acting’ officers and not full time appointments. Another West Drayton resident also spoke of the high turnover of officers which could be a factor in the lower confidence rates that Sir Bernard spoke of at the start of the meeting.

The response was again around finances – with uncertain finance, Sir Bernard could not make permanent appointments as he would not know if that funding would be in place to retain the post the following year. Our new Borough Commander is an acting position as was his predecessor, Nick Downing.

However, with the restructuring already mentioned he was hoping to make more of the positions permanent although until he has received his MOPAC7 priorities he will not have a road map to base these appointments around.

Supt Wingrove assured the gentleman from West Drayton that a new inspector for West Drayton is being appointed imminently and he hopes that will help.

Police vehicles and drivers – Ivor John brought up the reduction in numbers of training places for Police drivers and also what he perceived to be poor maintenance of force vehicles.

Sir Bernard responded that new courses are being laid on now for those wishing to take up driving in their duties and they are considering including driving courses in the two year probation training rather than after it as occurs now. He declared that he was happy with the maintenance contract on the 5000 or so vehicles the Met currently has on strength, 90% of which is outsourced. Mr John  agreed to disagree on how effective this was!

Knife Crime – A member of the audience brought up the issue of increasing knife crime. Sir Bernard responded that they had seen a decrease across London due to intelligence led targeting of gangs and also a reversal in the policy of drastically reducing stop and search although he did say that the latter needed to be employed sensibly.

Supt Wingrove said that knife crime in Hillingdon was not as big a problem as other parts of London but that the local constabulary are engaging with the community to bring it down.

I found the answer from Supt Wingrove somewhat disturbing in light of recent fatal stabbings in the area and also the report on Get West London and subsequently this weeks Gazette where a member of the public handing in a knife that she had found was turned away by the front desk at Uxbridge Police Station.

Whilst other boroughs do have a higher incidence of knife crime than Hillingdon, surely the potentially fatal nature of this offence should be given a high priority?

The unique nature of Hillingdon – Cllr Douglas Mills (Con), Cabinet member for Policing, pointed out that due to the physical size of Hillingdon (The second largest borough in London geographically) then the force needs to apply a bespoke approach to tackling crime. He then went on to grandstand about our Council putting addiitonal funding in to the Police (Quite amusing as Council Leader Puddifoot stated in 2014 in reply to criticism from UKIP’s Jack Duffin that they had no input in to this area!) and how they are working hand in hand to deliver a service that ‘Puts residents first’.

Sir Bernard agreed that Councils and Police working together is vital for communities and thanked Cllr Mills for the funding put in.

It was good to see the most senior Police Officer in London taking the time to visit the Borough and talk openly with residents about their concerns. The audience of just over 100 had their questions taken and hopefully both Sir Bernard and our new Acting Borough Commander took back some useful information with them from the evening.